The path of St. Basil 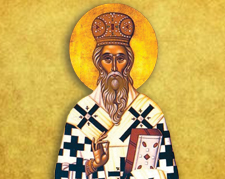 He was born as Stojan Jovanović in the village of Mrkonjići, near Trebinje in

Herzegovina, to parents Ana-Anastasija and Petar Jovanović. In fear of Devshirme (Turkish “blood tax” – taking Orthodox children and raising them as Turks), his parents sent him to the monastery of Zavala at his early age of 12. His uncle Serafim was the

hegumen (main priest) of the monastery.

After a few years Stojan joined monastery Tvrdoš in Trebinje, where he received his tonsure and was anointed as a priest, becoming the Parish of Popovo Polje.

Unfavorable circumstances in the monastery caused by the influence of outside strangers, as well as striving for further self-development lead him to Patriarchate of Peć as an archimandrite, and after that to Mount Athos, Wallachia and Russia.

In 1638 in Peć archimandrite Basil was anointed as the metropolitan of Zahumlje. His life was in constant danger of Turks and Uniats (Eastern Catholics). He was also overthrown from episcopal throne in Trebinje by the fake Uniat episcope Savatije.

He was mistreated many times in various ways by tribe leaders.

He found his eternal rest in 1671. His physical remains are kept in monastery Ostrog in Danilovgrad. Their comforting and healing powers are witnessed equally by Christians and other religions. Saint Basil of Tvrdoš and Ostrog is celebrated on May 12th according to Gregorian calendar (April 29th according to the Julian). 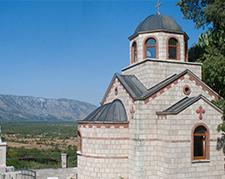 In the village of Mrkonjići in Popovo Polje there is a church dedicated to Saint Basil, built on foundations of his birth house. Church of Saint Nicholas of Myra is nearby, and that is where this saint was baptized.

Monastery Zavala is located at the edge of Popovo Polje, 50 km to the west of Trebinje. According to tradition, the church of Presentation of Holy Virgin Mary was made when the first Christian emperor Constantine was crowned.

Monastery is famous for being the place of Saint Basil’s temptation. 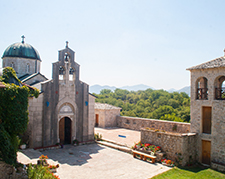 Monastery Tvrdoš was built on foundations of the church of emperor Constantine from 4th century, on the right bank of river Trebišnjica, 5 km to the west of Trebinje.

It is the place of Saint Basil’s tonsure and he was first made a priest  here, so the saint is called both “of Tvrdoš and Ostrog”. 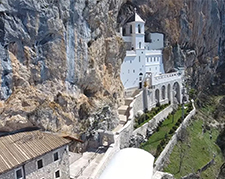 Monastery Ostrog was built by Saint Basil in 17th century at the location of mountain hermitages (religious retreats), where Saint Isaias of Onogošt lived piously. He had already built a small cave church dedicated to The Presentation of Holy Virgin Mary.

Ostrog is the most visited holy place in this area. Miraculous physical remains of Saint Basil are kept there.